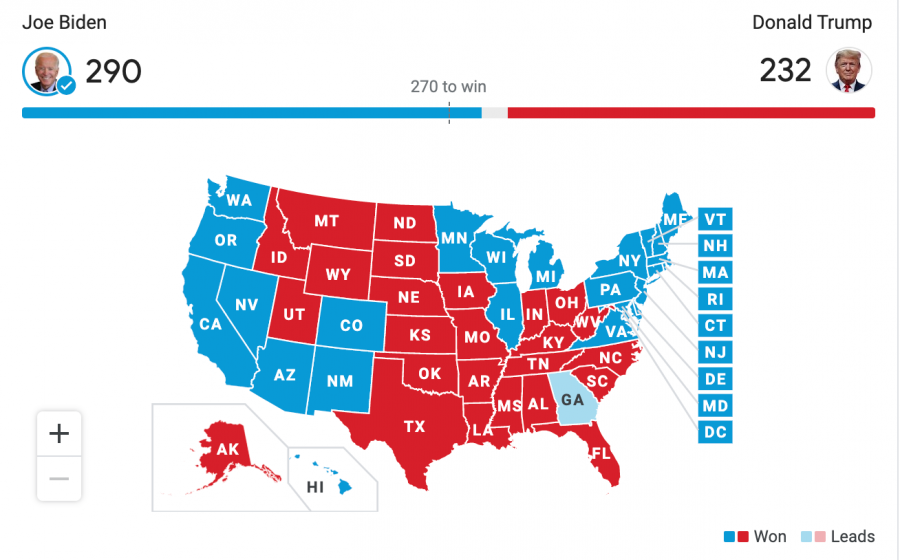 The Associated Press gives a final update on the votes in the 2020 Presidential Election.

Most Americans agree that the 2020 election season has been one of the most brutal and battering elections ever, or at least in a very long time. This is also the first time since 2000 that people have not known the winner for days after Election Day. This year, Joe Biden became the projected winner from all of the major American media companies such as ABC, NBC, and FOX four days after Election Day. However, President Trump still believes that he has a fighting chance and is currently in court in most of the swing states, including Michigan, Pennsylvania, and Georgia, with numerous allegations of voter fraud and election misconduct. The electoral college convenes on December 14, 2020, and they will be the final decision makers for this presidential election.

One positive factor that has come out of this election was voter turnout. Over 153,000,000 Americans turned out to vote this year, which is a whopping increase of about 24,000,000 people voting. Although some votes are still being tabulated, voter turnout has not been this high since 1908, the election of William Howard Taft.

“I think that it is amazing that over 150 million Americans participated in voting,” junior Lizzie Tribout said. “This was a very big election, and to have that large of a turnout really shows the importance of the election to the American people,” Tribout said.

Along with the large voter turnout, something became clear among Americans that made them vote, many prominent news figures and celebrities saying that it was the most important election of their lifetime.

Casting a ballot is an important part of democracy, where government is carried out by all people, not just one designated leader or a monarch. Democracy gives people a duty to give their input on how they want our country to be governed and who they think would be the best leader to watch over the governing process, such as watching over Congress.

“Voting is definitely important because it helps the government get a gauge of what the people want,” sophomore Jake Moreland said. “I think that the record voter turnout is great, and it shows that we are really getting more involved in the democratic process. I can tell that people are going to get even more involved in upcoming elections,” Moreland said.

Seniors who were born before November 3, 2002 were eligible to vote in the 2020 election. Nevertheless, many students at Belleville West seem interested and excited to express their voice on the ballot when they become eligible.

“I do plan on voting in my adulthood, I think it’s important,” senior Riley Quayle said. “If something really matters to you, I think you should fight for it, fight for what matters and fight for your beliefs,” Quayle said.

One hurdle that many Americans refuse to climb is the theory that their vote doesn’t count or doesn’t make a difference. Even though the president is not chosen by the popular vote, people’s votes count because they will go towards the number of votes in the state. In the past, some states have had very slim margins which could have been overturned if more people casted their ballots. For example, in the 2000 election, George Bush won Florida by about five hundred votes, and in the 2020 election, Joe Biden won Arizona by less than 10,000 votes. People who are currently eligible or will soon be eligible to vote should feel encouraged to vote next time because it is their civic duty to voice their opinion for the nation, and it is one of the easiest things one can do to shape democracy. The next general election will be in 2022, and the Illinois governor will be on the ballot.

“This country is so lucky to have the privilege of voting rights, so I think it is imperative that we exercise that right as a nation,” Tribout said.